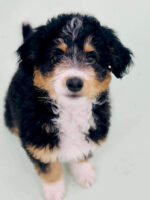 We got Ollie in Feb 2021, and he is everything we could have wished for. He’s so cuddly, playful, and intelligent. The experience of picking a puppy was made very seamless by Anneloes. She is a kind and knowledgeable breeder who clearly loves her dogs and is also very thoughtful towards her clients. She answered all our questions and even FaceTimed with us so we could pick our puppy virtually during covid restrictions. I can’t wait to get Ollie a brother or sister someday! When we are ready to do so, we will be calling Anneloes. 🙂

I got Delilah in November of 2020. She’s super healthy and such a smart girl. This was my first experiencing purchasing and owning my own dog, so I was a bit nervous. Anneloes and Jersey Acres made me feel comfortable and gave me enough information that made it easy to properly care for Delilah. I couldn’t picture what my life would be like without her anymore. Very thankful for Jersey Acres for bringing us together! 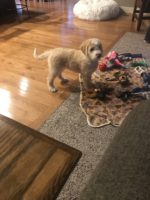 We got our puppy boston yesterday and he is soooooo sweet and friendly. He’s already started adjusting to our home. He is a wonderful addition to our family so far and we are sure it will stay that way. Anneloes was a wonderful person and The facility is also amazing. If I get another bernedoodle she would definitely be first on the list of breeders!