Maddie is a sister of Bella from the same litter. Maddie is also a very sweet girl. She lives with the same Guardian home family as Piper and she loves to be with Piper too. Sweet girl and an amazing family pet. 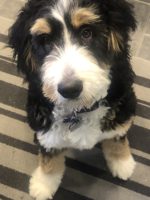 We have been so very happy with our Mini Bernedoodle, Bauer!! He is loving, listens most of the time and just love being around people. So very happy to have him a part of our family!!!
I would highly recommend this breeder!!!

We got our puppy just over two mouths ago and he has been so wonderful! Annaloes gave us lots of time to figure out if Hobart would be the right fit and answered our countless questions. She was even available to answer some questions after we got him. Thank you to everyone at Bernadoodles of Jersey Acres for helping us get our perfect pup!

We love our dog 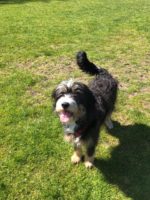 We got a Aussie Mountain Doodle from Jersey Acres and we love her. She is so smart and loving, we are so happy with our choice. Annaloes was great-helpful and did a follow up phonecall and answered all our questions. We got the dog shipped to Vancouver without any problems. We are really happy.